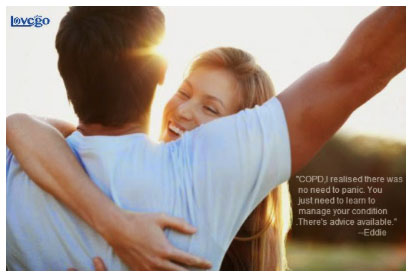 COPD is a leading cause of morbidity and mortality worldwide, many people are facing and fighting with the disease. No matter how hard are the daily life, we have the reasons to be active and positive.

This week we share two stories from the NHS, many of the people with the COPD have the similar experience. Anyway, COPD won't scared us, we shall learn to how to manage the conditions.

"I thought, I can either be miserable or I can live life to the full"

Lynn Ashton was having a happy Christmas dinner until a candle set her plastic tablecloth alight.

“We were taking a break after the main course when one of my children said she could smell something funny,” says Lynn.

She sat outside trying to get her breath. Initially, she didn’t go to the doctor. But over the next few weeks, her breathing got worse. She was already an asthmatic and smoked around 15-20 cigarettes a day.

“I spent the next four months in and out of hospital with chest infections,” says Lynn. “At times, my breathing was so bad I could barely bend down to tie my shoelaces.”

Lynn was diagnosed with COPD and bronchiectasis, an abnormal widening of the air sacs in the lungs. It was a shattering blow and she stopped smoking immediately. Lynn was determined to stay strong. Her daughter was pregnant with her first grandchild.

“My prognosis wasn’t good at first,” she says. "I thought, I can either sit around and be miserable or I can live life to the full. I wanted to see my grandchild grow up. I wanted to help other people with COPD. I believe things happen for a reason.”

Lynn is on a treatment regimen which includes six different drugs and a nebuliser. Two years ago, she had a small catheter fitted which passes from the lower neck into the windpipe and delivers oxygen directly into her lungs. It’s held on by a discreet chain around her neck. “I clean it several times a day and it’s wonderful,” she says.

Lynn now helps other people who have COPD. She joined a local support group in Huntingdon called Hunts Breathe for Life, which she now chairs, and started to raise money for the cause.

“I started off doing some short walks. Then it occurred to me that I’d love to do the London Marathon. I called the British Lung Foundation and they were very enthusiastic and offered me a place. But when I told them I had COPD and was on oxygen, they were rather worried.”

Lynn started her training by walking for just one minute on a treadmill at her local gym. Gradually, under the supervision of her nurse, she increased the time until she was ready to realise her dream.

“It took me five days to finish the marathon,” she says. “I had a trolley to help me walk and had my oxygen with me at all times. Every afternoon I’d go back to the hotel and rest. It was a wonderful experience. I raised over £14,000.”

Lynn believes in living life to the full. “There was a time when I was very angry and that’s normal. I still have bad days. But when I look around, I see that there’s always someone worse off than me.”

"When I woke up, I could hardly breathe"

With a little help, Eddie Brownlow realised he could manage his COPD and get on with life.

Having served in the navy and the army as a paratrooper, Eddie Brownlow was fit when he left the forces aged 47. However, he had smoked about 15 cigarettes a day for most of his life.

“It was the done thing back then. It relaxed me after a parachute jump,” says Eddie.

After retiring from a second career as a sales manager, Eddie was getting breathless whenever he had to lift something heavy or exert himself. He ignored the fact that he was feeling a “bit puffy” all the time and carried on.

However, by 1998, he couldn't ignore it any more. “We were in Mexico on holiday and I had booked a marlin fishing trip,"says Eddie. "But when I woke up, I could hardly breathe. Luckily I recovered, but when I got back home I picked up a chest infection.”

He went to his GP, who referred him to hospital. He was diagnosed with COPD. He followed a rehabilitation programme, which he describes as excellent. He learned about his medication, how to exercise and how to improve his diet.

Eddie says, “I realised there was no need to panic. You just need to learn to manage your condition. There's advice available.”

One important thing Eddie knew he had to do was give up smoking. It took him quite a while, but with patches, advice and support from his wife, he finally kicked the habit.

He also got involved with his local British Lung Foundation group, Breathe Easy, a voluntary organisation that supports people with breathing conditions such as COPD. Within a few months of joining, he took over his group and built up the membership.

Eddie now makes it his job to raise awareness of breathing conditions and, through his efforts, the town's mayor selected his branch of Breathe Easy as his chosen charity recently.